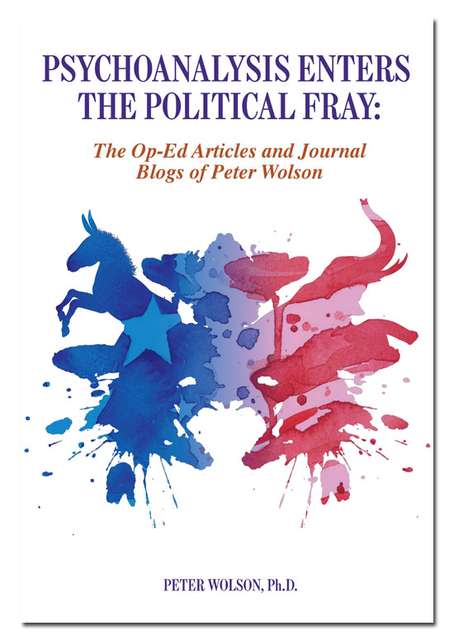 NCP, PCC & LAISPS Present:
Psychoanalysis Enters the Political Fray: A Psychoanalytic Town Hall
with Peter Wolson, PhD
at the New Center for Psychoanalysis: 2014 Sawtelle Blvd., Los Angeles, CA 90025
The Opinions Expressed Below and at This Town Hall/ Book Signing Event are Solely Those of the Presenter and Do Not Represent the Opinions of NCP, PCC or LAISPS
For the last two and a half years of the Trump administration, blue state Americans have been jolted daily by a shocking onslaught of tribal warfare between Republicans and Democrats and by extreme expressions of hatred, including homicidal violence. From this liberal perspective, blatant misogyny, racism, anti-Semitism, gender bashing, tariff wars and scurrilous attacks on the press, immigrants and Muslims have inundated a regressive political climate of character assassination, conspiracy theories and lies. Yet the economy is booming and President Trump is extremely popular among red state Republican conservatives, Christian evangelicals, Catholics and his base. In contrast, Democrats are struggling to find strong leaders to stand up against Trump in the 2020 election campaign, even with Joe Biden’s entry.

As psychoanalysts when entering the political fray, it is extremely important to try to empathically understand the psychology of the “other,” whether it is a Republican or a Democrat. For example, how can liberal Democrats explain Trump’s appeal to virtually half of the country in light of his apparent narcissism, insulting behavior, chronic lying and his current attack on the foundation of American Democracy: its checks and balances? Through executive privilege, he refuses to allow the House Justice Committee to further investigate evidence of obstruction of justice in Mueller’s report and encourages representatives of his administration to defy the law by ignoring congressional subpoenas? What psychodynamics have motivated America’s ostensible lapse in morality, ethical integrity and even reality testing?

On the other hand, how can red state Republicans understand the Democrats’ willingness to have federal and state governments spend one’s hard-earned money on high taxes to finance massive programs of welfare, Obamacare, medicare and social security, overly regulate business and environmental protection to the detriment of free enterprise and America’s economic prosperity, and support abortion (i.e., seen by social conservatives as child murder) and the human rights of racial and gender diverse minorities.
In his new book, Psychoanalysis Enters the Political Fray: The Op-Ed Articles and Journal Blogs of Peter Wolson, Dr. Wolson argues that a psychoanalytic perspective is essential to illuminate the unconscious psychodynamics of these crucial issues in the public political dialogue. Since 1972, he has ventured beyond the couch and published numerous psychoanalytically informed op-ed pieces for the Los Angeles Times and journal blogs for the Huffington Post, Thomson Reuters and CounterPunch on the “breaking news of the day,” which are included in this book, along with updated commentary. He demonstrates the enduring, repetitive nature of unconscious political psychodynamics, and encourages psychoanalytically oriented mental health professionals to join him in deepening public awareness by sharing their psychological wisdom with the American public.
This Psychoanalytic Town Hall will demonstrate how to bring a psychoanalytic perspective to political issues.
The Presenter:
Peter Wolson, PhD, is a training/ supervising analyst and faculty member of the Los Angeles Institute and Society for Psychoanalytic Studies. He has served as LAISPS’ President and Director of Training, is a co-founder of the Confederation of Independent Psychoanalytic Societies (CIPS), and was President of the Los Angeles Society of Clinical Psychologists. He is on the resident faculty of the Wright Institute Los Angeles and in private practice in Beverly Hills.
Goals & Objectives
Upon completion of this program, participants should be able to:
Method of the Town Hall
Dr. Wolson will first share passages from selected op-ed pieces that illuminate the unconscious psychodynamics of political events at the time they were published, and explain how these same psychodynamics motivate the “breaking news" of today. In the second half, Dr. Wolson will moderate a “Psychoanalytic Town Hall” based on political issues generated from the audience. The flow of the Town Hall will vacillate between the audience’s free expressions of political opinion, feelings and beliefs, like the manifest content of free association, and then move to neutral analytic space for speculation about the latent, unconscious psychodynamics that could motivate and explain these political issues.
Psychoanalysis Enters the Political Fray: The Op-Ed Pieces and Journal Blogs of Peter Wolson will be available for purchase, and Dr. Wolson will sign copies at the beginning and end of the program. This book is also accessible through InternationalPsychoanalysisBooks.net and Amazon.
Cultural Sensitivity
The seminar will focus on diverse political and cultural perspectives.
No Continuing Education Credits Offered for this Event
Schedule
7:00 to 7:30: Registration and book signing
7:30 to 7:40: Introduction by Dr. Michael Gales
7:45 to 8:30: Dr. Wolson’s political analysis
8:30 to 9:15: The Psychoanalytic Town Hall

Add Psychoanalysis Enters the Political Fray: A Psychoanalytic Town Hall to my calendar.