Join the members of NCP for our Film and Mind Series. 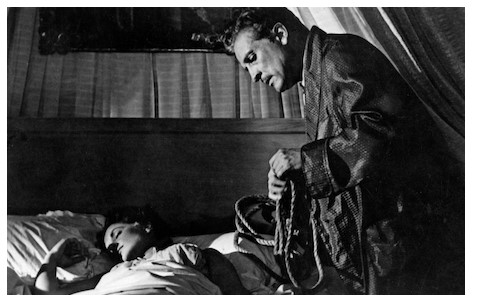 Buñuel’s 1953 film was made in Mexico during his exile from Franco’s Spain, and renamed for American cinema-goers as This Strange Passion (Indeed!). It stages a number of themes dear to the director, and is, by his own account, somewhat autobiographical. Francisco, the bourgeois protagonist, wins Gloria as his wife, only to become violently jealous and paranoid. Gloria attempts, unsuccessfully, to maintain the relationship, and Francisco’s sanity, through love and devotion. Initially a commercial and critical failure, Buñuel was pleased to discover that the French psychoanalyst Jacques Lacan showed the film to his students as a primer on paranoia. This film should be of interest to psychoanalytic clinicians, as through a combination of gothic, surrealistic, and soap opera elements, it creates a spectacle that produces its effects of fear and knowledge of human passions and their vicissitudes, whether neurotically or psychotically structured.

A discussion will be held after the film.

John Wayne, PhD, is a clinical psychologist in private practice in South Pasadena, California. He is a member of GIFRIC (Groupe Interdisciplinaire Freudienne pour Recherches et d’Interventions Clinique et Culturelles), the California Psychoanalytic Circle of the Freudian School of Quebec, the California Forum of the IF-EPFCL, Division 39 (Psychoanalysis) of the American Psychological Association, and the San Fernando Valley Psychological Association. He has been published in the International Journal of Psychoanalytic Self Psychology, Volume 7, 2012. He taught psychoanalysis at Antioch University as an adjunct professor. He has presented at NCP on several occasions.

Gabriela Costardi, PhD, is a psychoanalyst in private practice in Pasadena. A graduate of the University of Sao Paulo, Brazil, her practice is oriented by the psychoanalysis of Jacques Lacan, who took the steps of Freud. She is currently the Delegate of the California Forum of the Lacanian Field.

Target audience: Mental health professionals and open to the public interested in psychoanalytic perspectives. Open to members and the community.

IMPORTANT DISCLOSURE INFORMATION FOR ALL LEARNERS: None of the planners and presenters of this CME/CE program have any relevant financial relationships to disclose.

PHYSICIANS: This activity has been planned and implemented in accordance with the accreditation requirements and policies of the Accreditation Council for Continuing Medical Education (ACCME) through the joint providership of the American Psychoanalytic Association and the New Center for Psychoanalysis. The American Psychoanalytic Association is accredited by the ACCME to provide continuing medical education for physicians.

The American Psychoanalytic Association designates this Live Activity for the maximum of 2.5 AMA PRA Category 1 Credit(s)™. Physicians should claim only the credit commensurate with the extent of their participation in the activity.

PSYCHOLOGISTS: The New Center for Psychoanalysis is approved by the American Psychological Association to sponsor continuing education for psychologists. New Center for Psychoanalysis maintains responsibility for this program and its content. Full attendance is required for psychologists to receive credit; partial credit may not be awarded based on APA guidelines. For the psychologists’ records, certificates of attendance are provided at the completion of the course.

SOCIAL WORKERS, MARRIAGE and FAMILY THERAPISTS (LCSW, LMFT, ASW, IMF, LEP, LPCC, PCCI): The New Center for Psychoanalysis is a continuing education provider that has been approved by the American Psychological Association, a California Board of Behavioral Sciences recognized approval agency.

REGISTERED NURSES: The New Center for Psychoanalysis is an accredited provider approved by the California Board of Registered Nursing (Provider #CEP1112). Registered Nurses may claim only the actual number of hours spent in the educational activity for credit.

Add Film and Mind: "Él (This Strange Passion)" to my calendar.